You can understand the basic operations in the tutorial, but don't know what to do in the game to find out if it's a good deal or a loss. In particular, For free-to-play .

Whatever you do, you will need to cultivate your character. The party is 5 people, but please be careful as you will regret if you train too many characters. 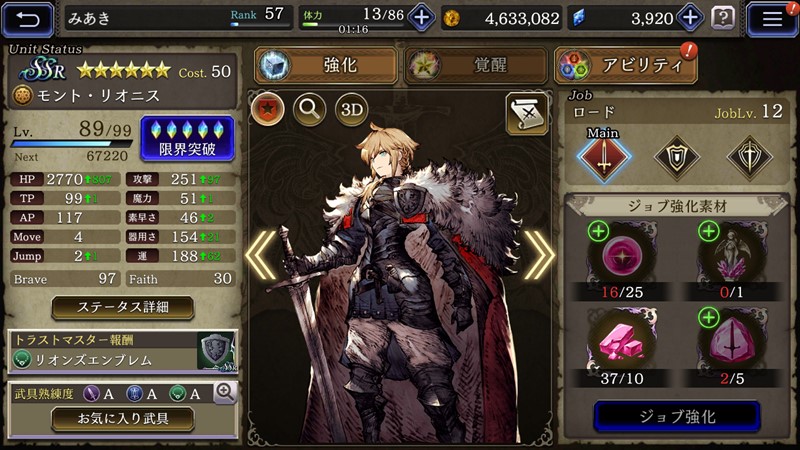 We recommend focusing on the development of UR characters, such as the main characters Mont and Risemara, and distribution characters (please check their strength before developing). Mont is a good character used by people in the arena. Mont is described below, but it is a super recommended character because it is easy to grow and strong. By the way, those who have Engelberth do not need to grow mont (Lv65 will be as strong as mont). It's important to know and proceed. In general games, I think there are many "levels" and "convex (breakthrough)", but there are also "awakening", "abilities", and "job levels", and there are so many training elements. 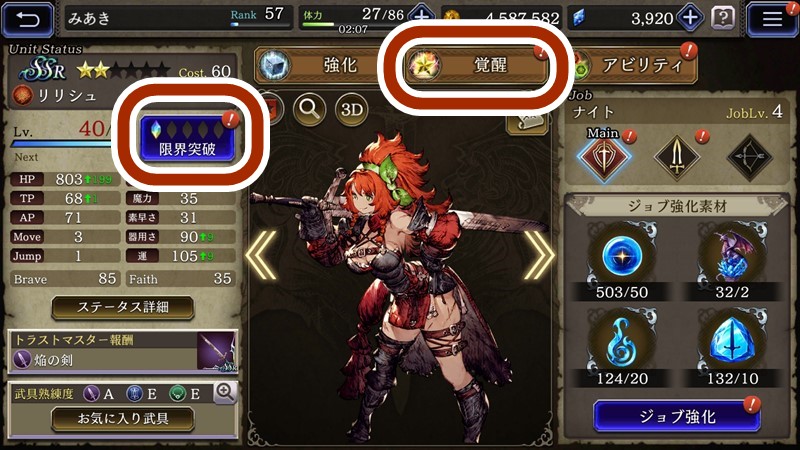 Firstly, we will talk about Awakening and Limit Break. Neither is training that can be solved in time like raising the level. Awakening 6 & Breakthrough 3 is the lowest line (All skills can be used = Ability Board fully open). About 2 months after release, Breakthrough 4 will be required (because of Trust Master equipment). 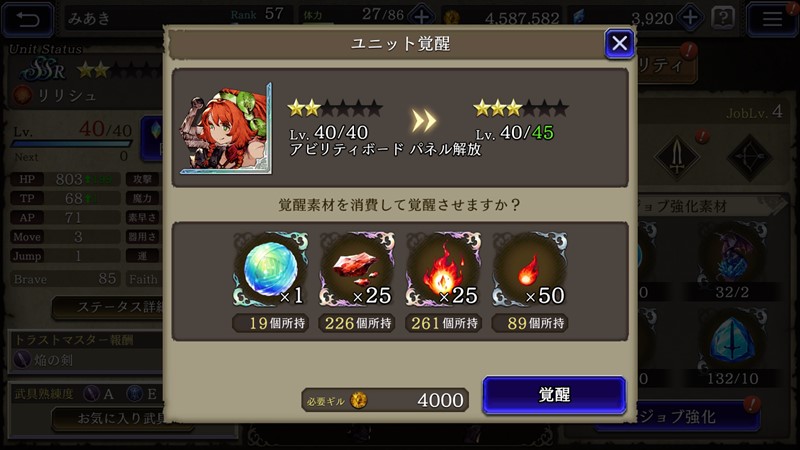 Awakening requires awakening materials like the above screen. Of these, only the rightmost material can be obtained by dropping, while other materials can be purchased with stone or limited acquisition (such as one-time purchase and mission clear reward).

Thus, those who have limited billing should only cultivate their favorite characters because only a limited number of characters can awaken. Awakening affects the "Upper Limit Level" and "Ability Board Release". 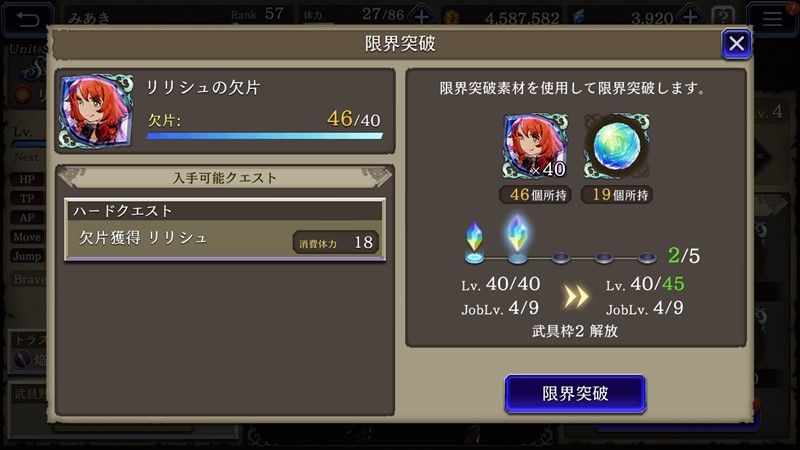 Limit Break is the same as a general soshage, and requires a "Shard" and a "Phantom Ball" that can be obtained by wearing a character drawn with a gacha.

There is an ability called Ability Board, and you will open up the space with JP (job point). You will learn skills and improve your status. JP can be obtained in the barracks of the guild (can be joined at rank 10) or after battle.

Job Enhancement raises the job level with enhanced material. Reinforcement materials are available in quest drops. If you do not raise the job level, the ability board will not be released, so you need to raise it as necessary. Your status will rise a little.

How to proceed early stage 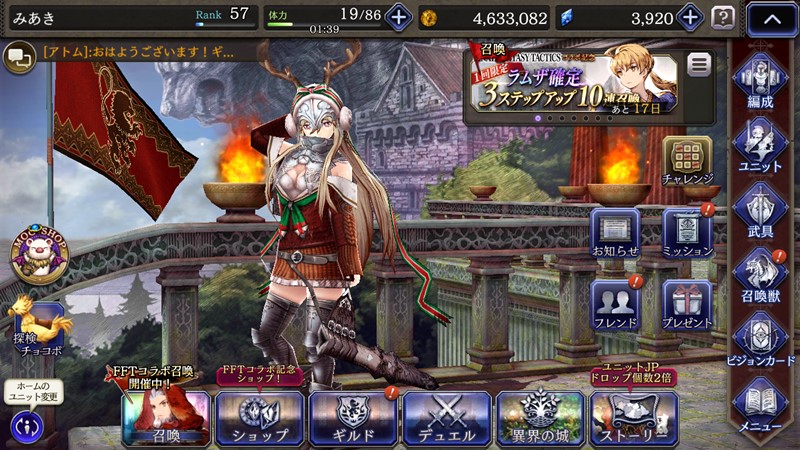 There is a beginner quest that also served as a tutorial early in the game. Until you clear, there is an icon on the left of the home screen (you can also go from the castle of another world).

You can get stones and various materials, all clear and you can get 10 consecutive SSR gacha tickets. It is ant to clear when the stamina runs out.

In this game, the only experience required to raise the player rank is story clear and mission clear, so let's advance the story and release the functions. You can join the guild at RANK10. は In the early stage, the pounding rank rises and the physical strength overflows (the physical strength increases beyond the upper limit, but natural recovery will be lost during that time). Immediately before or when the player rank rises, do the following two. 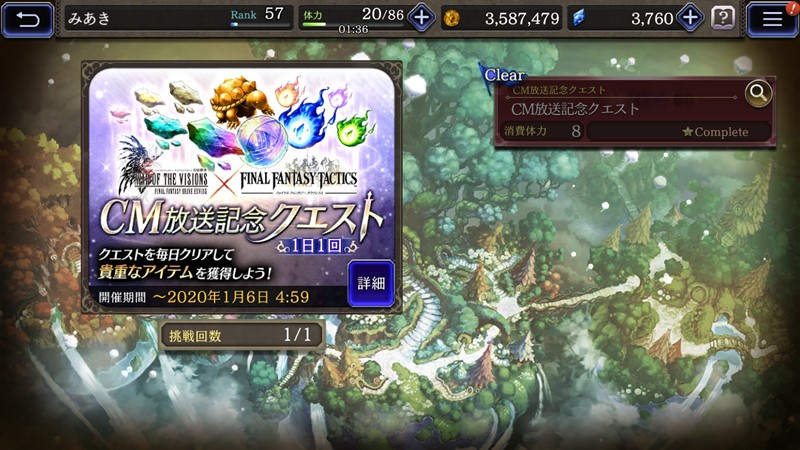 ３．Gills and Pots in the Castle of the Other World 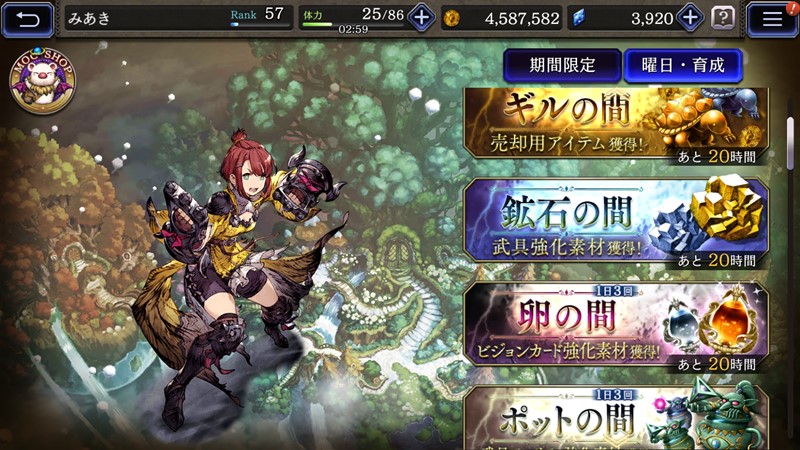 There are times when various materials can be obtained in the castle of the different world, but among them, let's give priority to "Gill and pot". Eggs are available as needed, but they can also be obtained from the secret book of the current event.

Above all, this game consumes a lot of gil. Basically, weekdays are limited to three times a day, but on Saturdays and Sundays, the gap between the gil is open indefinitely, so there is no loss as much as possible. Even tens of millions are not enough.

Also, since you can only get pots that increase the level of armor abilities and limit bursts, I want to give priority to these two.

That's the basic flow. There are also shops, gachas (summons), PVPs, etc., so there are many things to do every day. I'd like to list the things to do in the next article.